Panchuka – Best for a Good, Happy, Healthy and Long Life

On the auspicious occasion of 5 days long celebration of ‘Panchuka’, ‘Astang Ayurveda’ greets everybody and wishes the best for a good happy, healthy and long life. 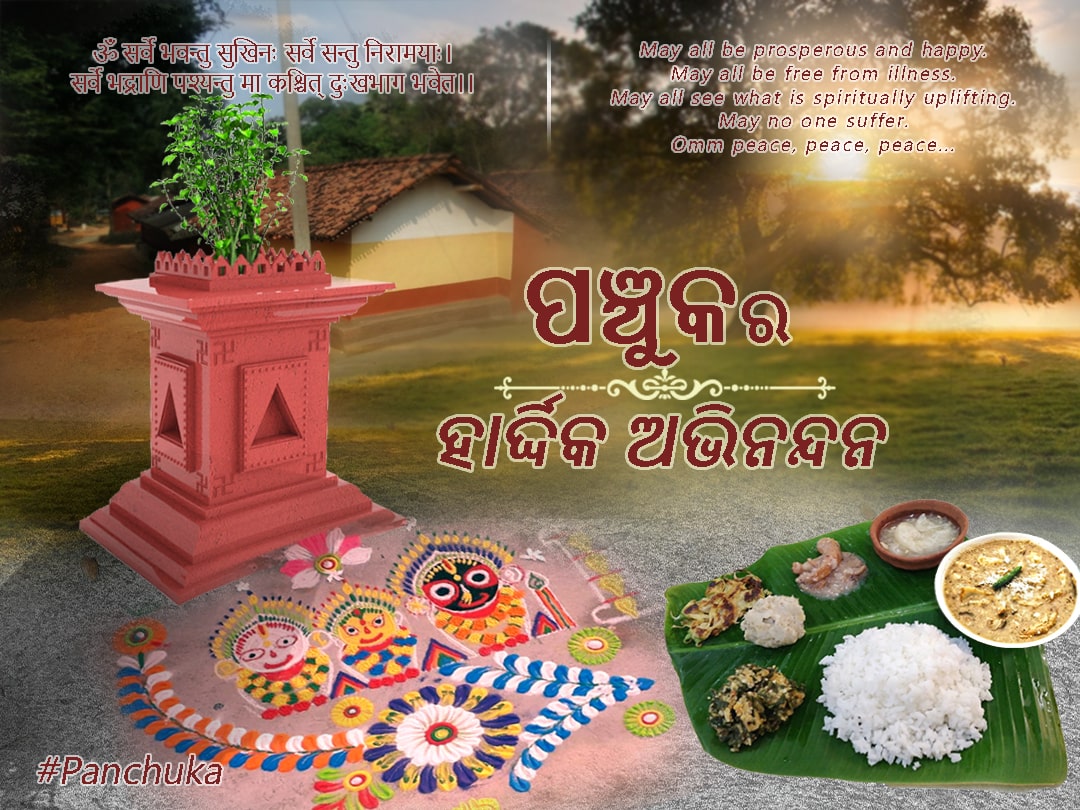 Panchuka can be fragmented into two words Panchu and Ka. Panchu means five, Ka means Agni (fire). These five days, everyone must take care of their Agni (fire). Agni is the basis of life. A good health or bad is established on the goodness of the Agni. One year is divided into twelve months or six seasons. The months are Baishakha, Jyestha, Ashadha, Shravana, Bhadraba, Ashwinya, Karttika, Margashira, Pausha, Magha, Falguna and Chaitra. The six seasons are Greeshma, Barsha, Sharata, Hemanta, Sheeta and Vasanta. Two months combine together to make a season. Three seasons combine together to make a ‘Kala’. Barsha, Sharata and Hemanta, the three seasons are comprised of six months. These six months of the year combinedly is called ‘Visarga Kala’. Sheeta, Basanta and Greeshma combinedly form the ‘Adana Kala’, which is comprised of other six months. During Visarga Kala Surya (Sun) and Chandra (Moon) deliver energy to the plants and animals. During the Adana Kala they take back the energy.

You may be interested in: Good Food, Sleep and Bliss – Healthy Lifestyle

The juncture between two seasons is called the ‘Ritu Sanddhi’. Ritu sanddhi is a transit period when the effect of one season switches over to the next one. By that time it becomes difficult for human beings to switch over their food habit and lifestyle according to the next season. This is the reason why people get diseased when there is a change of season (Ritu). Now think of what will happen at a kala sanddhi which is the juncture of two kalas comprising of three seasons.

Panchuka is the kala sanddhi when we switch over from visarga kala to Adana Kala as a whole and from Hemanta ritu to Sheeta ritu in particular. During panchuka there is major chance of the Agni (fire) getting disturbed. Keeping that in mind our ancient scientists have programmed food habit and lifestyle for the period of ‘Panchuka’.

They have suggested to avoid non-veg even from the first day of the month of Karttika. During Panchuka it is suggested to take ‘Habisha Dalma’ made of green gram and local vegetables. Green gram is the lightest among all the pulses and cereals. It is a medicine grade food that keeps the digestive system healthy and light. It is advised to avoid dinner after the sun set. The scholars of ‘Dravya Guna’ department can elaborate more about the benefits of the other vegetables used to make a habisha dalma. This 5 days celebration help us enhance our Jatharagni and keep the Kayaagni intact. The science lives with the religion. Celebration of panchuka is a great gift by our ancient scientist to the mankind.

“May all be prosperous and happy.
May all be free from illness.
May all see what is spiritually uplifting.
May no one suffer.
Omm peace, peace, peace…”