CSR or Central Serous Chorioretinopathy is an idiopathic disorder that typically affects one eye of a young or middle age person. This is non cystoid type of macular edema. It is the serous detachment of the sensory retina at macula from RPE due to secondary 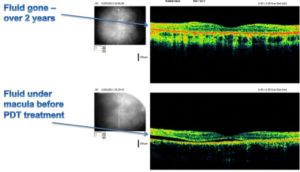 What Happens in CSR?

WHAT AYURVEDA SAYS ABOUT CSR

It can be correlated with Dhoomadarshi, an eye disease described under 12 Dristigata vyadhi by Sushruta. Bahyapatalagata dosha (the disease Dhumadarshi affects outer layers of retina).

CAUSES OF DHOOMADARSHI ACCORDING TO AYURVEDA