The First trimester will very soon be uploaded.

The gradual development in pregnancy is being felt during this trimester. If it is pleasant experience of first time pregnancy then there is quickening( movement of baby) at around eighteenth week, otherwise at sixteenth week. There is prominence of blue veins over breast. There are marks over the face. A deep prominent line called Linea nigra is being observed from the umbilicus to the lower abdomen during this period. All the signs and symptoms observed during the trimesters are parts of a normal process. These are neither diseases nor their complications. So whenever any such problems arise the pregnant lady should consult older ladies or midwives instead of getting worried. She should take two tea spoonful of milk butter daily with or without milk. A milk and butter mixed porridge( Khichdi) may be taken as diet following a chicken soup. During this time fish, crab, tortoise, flesh of water birds should be avoided. Ayurvedic Antenatal care

A common woman every day takes 2200 calorie food. Two third of this energy is being spared for the management of breathing, blood circulation, digestion, nourishment etc. This requirement enhances by twenty per cent more after the fifth month due to the presence of growing fetus. That means instead of 22oo calorie the requirement will be increased to around 2500. But it is a matter of great regression that the quantity of food intake reduces due to the loss of interest in food during this period. In order to compensate the need gap she should take high calorie, tasteful carbohydrate and fat food. For this purpose the diet prescribed for the fifth month is advisable.

No pregnant should forget that she must meet the doctor in 14th, 18th, 24th, and 28th week or at least during 20th and 24th week for a routine check up.

The third trimester starts from the 29th week. Swelling in feet is observed during this period. Due to growth in fetus pressure is being exerted on lungs and heart. So the lady feels dyspnoeic and also the palpitation of heart as well. Quickening of the heart is being observed. There is frequency of micturation during the 38th week due to the extra pressure of the fetus on the urinary bladder. As the head of the fetus rests on the pelvic path there is decrease in the heaviness of abdomen. The linea nigra becomes more prominent. There is stretch marks on the lower abdomen.

In the seventh month medicated ghee fermented with Prithak panni, Vidarikand, Gokshura should be taken while the fooding style remains the same.

In the 8th month she should take porridge (Khichdi) mixed with milk and ghee. Of course it may bring grey look to the eye of the child, but he/ she becomes disease free, fair, strong, spiritual, leader and compact bodied. During this time asthapan and anuvasan Vasti (Medicated enema) should be taken under the direct supervision of a doctor. It helps to tone up all the nerves related to genital system and a definite normal delivery is expected.

According to Ayurveda ojas the nectar of all the seven tissues (Rasa or plasma, blood, flesh, fat, bone, bone marrow, semen) changes its place from fetus to mother and vice versa repeatedly through the umbilical chord. So every time there is state of fluctuation. If a baby takes birth during this 8th month there is higher chance that the baby will be weak in body and mind, or even there is chance of death of the mother or the child.

In order to prevent birth of a baby during the 8th month the mother should avoid excessive movement, weight lifting and other hard works. Every day she should pray god after bath to keep her mind strong and disciplined.

In the ninth month intake of chicken soup and porridge (Khichdi) mixed with ghee are advisable. The pregnant should take bath as it was mentioned in the 1st trimester and take Anuvaasan Vasti under the supervision of the doctor. At least a cotton pad merged in Kadamba masha taila should be placed over the vegina to make it soft and smooth and avoid infection.

During this trimester the pregnant should meet the doctor in the 32nd, 36th, 38th, 39th, and 40th week or at least in the 32nd and 36th week for a routine check up. After the seventh month sex is strictly prohibited. 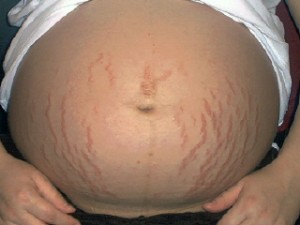 called striae gravidarum are observed in abdomen, breast and thigh during this trimester. Intake of butter is advisable to prevent this problem. Along with some local applications are advised.

2. Apply a paste of Kutaj, Tulsi seed, Mustak and Haldi. If there is itching in linea nigra, don’t manipulate it. Otherwise there will be skin problems.

Like a very common person the diet of a pregnant can be classified into six types.

Such as:  carbohydrate, protein, fat, minerals, vitamin and water. The first three types of food are responsible for the structure, texture, energy, and growth of the body while the last three are for the production of the enzyme, hormone and decentralization of the energy.

Protein – It is very much helpful for the growth of the body. 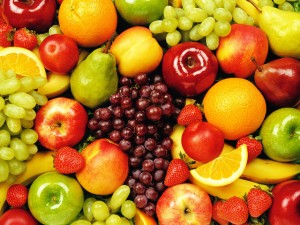 In the same continuation it nourishes the fetus. Milk, fish, meat, soya are full of protein (Soya Bean is a vegetable).

Carbohydrate and fat – Both of these foods provide energy to the body. Some fat-soluble vitamins help in the nutrition of the body. Intake of vegetable oil, butter, ghee, curd, meat increases the fat level. Decrease in the level of carbohydrate i.e. low intake of rice, wheat, and potato decreases the weight of the pregnant, which is not a normal process.

Mineral and Water – Salt, iron, calcium are the prime ones among the minerals. Although excessive intake of salt is not advisable, a pregnant can take 500mg of iodized salt every day.Meat, green vegetables specially leaves are important among the iron containing food. Now a days people mostly prefer Paalak leaves. But Leutia, Bathua, Sunsunia, and Punannava are the all time best leaves for pregnants. Milk, cheese, green vegetable contains maximum calcium.

A pregnant lady must take at least two and half liter of water everyday. Pregnancy care

Vitamin B12 – It is available in meat, liver etc.